Have A Teen Driver in the House? A Quick Look at the Intermediate License

If you have a teen driver in the house, you are probably familiar with the Intermediate License. This license imposes certain conditions and restrictions on drivers between the ages of 16 and 18. You can find the full statute at RCW 46.20.075 but the some of the important restrictions include:

1) For the first 6 months of an Intermediate License, the driver can have NO passengers under 20 years old other than immediate family members. Sorry cousins!

2) Once the first 6 months have past, the driver has an additional 6 months in which no more than 3 passengers under 20 years old (other than immediate family members) can be in the vehicle. Carpooling is great for the environment but be careful if you’re in this restricted period!

3) For the first 12 months of an Intermediate License, the teen may not drive during the hours of 1 a.m. and 5 a.m. unless you are driving with another licensed driver who is over the age of 25. There is an exception if you’re working on a farm during those hours (but let’s hope not). So, if your parents let you go see your favorite band in Seattle, make sure you don’t get stuck in traffic on the way home. Heavy concert traffic is not a defense to driving at 1:00 am so plan accordingly.

4) This one might surprise some people. A teen driver may not use a cell phone even with a hands-free device! There are a few exceptions but they pertain to reporting illegal activity or emergencies. Being late to your friends house is not an emergency.

Can I Bend The Rules Just A Little Bit?

I look like I’m 20 years old so how can an officer catch me?

If you are an incredibly safe and conscientious driver, you might get away with having too many passengers in your vehicle (but we don’t recommend testing that theory). In RCW 46.20.075(6), the statute notes that the above restrictions may only be enforced as a secondary action. This means that the driver is violating some other rule of the road (speeding) and then the officer notices that there are 5 passengers in the vehicle. The officer may inquire whether the passengers are immediately related to you. The exception to the secondary citation, is the restriction regarding cell phone usage. Using your cell phone (even a hands-free device), is a primary offense and the officer may pull you over even if you are not committing any other traffic violation.

Practically speaking, don’t test the “I look older and I’m a safe driver” theory. If an officer finds it suspicious that there are 5 teenage passengers in your car, there is a good chance he or she will find some reason that you have violated a rule of the road. You may have signaled your intention to turn but not with adequate warning. We all make little mistakes on the road and it’s fairly easy to give cause for a stop. Since traffic accidents are the #1 cause of death for teens, safety concerns for the driver and teenage passengers are going to be paramount when an officer considers stopping a car full of teenagers. It might seem unfair or targeted but a teen driver should not test the restrictions.

So what’s the big deal if I happen to drive my 4 teenage friends home at 2:00am?

What about accidents that aren’t your fault?

Well, this is the only concerning part for us as a parents. Understandably, teens who cause accidents might need a little more “growing time” before being back on the road. However, a teen who was involved in an accident “where no one was cited or was found to have caused the accident” (RCW 46.20.075(8)(c)) is still considered in violation of the Intermediate License restrictions. Consequently, a teen driver involved in an accident should be extra vigilant in requesting an officer to investigate. Based on the simple reading of the statute, the teen driver has the burden to establish that he or she was NOT the cause of an accident. Even if the teen was not cited or found to be at fault, the accident can be a cause for a first warning or a full suspension of the teen’s license.

What if I get pulled over for speeding, nighttime restrictions, and talking on my cell phone? Does this lead to one warning or will I be suspended due to the three separate violations?

According to DOL, this is ONE violation. Hence, in the above scenario (assuming you’ve had no other other violations on other dates), you will only be issued a warning letter. The violations are date-based. However, there is a caveat to this bit of information. Occasionally, when a teen receives a speeding ticket as well as a violation of a restriction, such as driving between 1am and 5am, a ticket will be issued and simultaneously a “violation notice” for the nighttime driving will be sent to DOL. It is possible that DOL will fail to notice that the speeding and the restricted nighttime driving occurred on the same date. In that case, DOL might send a letter notifying the teen that their license will be restricted for 6 months. This can be remedied by immediately notifying DOL that the incidents occurred on the same date.

Penalties For Violations While On An Intermediate License

The penalties can come generally from one of three events. (1) The teen disobeys the restrictions that are conditions of the intermediate license (i.e. having young passengers in the car, or being out too late), (2) if the teen breaks one of the “rules of the road” (i.e. speeding or the like) and (3) if the teen is involved in a collision, even if it is not their fault. There is a “step up” in consequences for each progressive violation, as shown below:

• First Violation: The Washington State Department of Licensing will mail a written warning to the teen’s house.

• Second Violation: The Washington State Department of Licensing will send a letter indicating that the teen’s license will be suspended for six months, or until the teen turns 18 (which ever comes sooner.) The teen’s license becomes suspended.

• Third Violation: The teen’s license will be suspended until the teen turns 18. So, for example, if the teen has two violations within the first six months after obtaining their license at 16, they potentially can be suspended for a year and a half!

If Your Teen Has A Violation, Contact Us Right Away!

If your teen has been stopped and cited for anything, we can often assist by challenging the ticket in Court.  On many occasions we can beat the ticket or change it to something that will not be reported to DOL.  Call our Bremerton office at (360) 792-1000 or our Gig Harbor office at (253) 312-3838 or CLICK HERE to fill out our online contact form.  At Witt Law Group we know how important it is to keep those teen drivers driving themselves to their own soccer practices!  We do whatever we can to help keep kids licensed.

The moral of the story, be a safe driver, don’t violate the Intermediate License restrictions, and don’t ignore any warning letters or notices from DOL!  But if things go sideways, give our office a call. 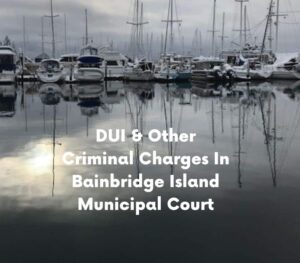 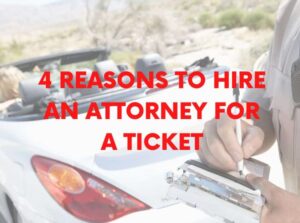 Four Reasons To Hire An Attorney For A Traffic Ticket.